Published by greymouser on March 6, 2018

Who Decides What Becomes a Mental Disease?

ADD or ADHD Or Just An Active Little Boy?

Before ‘ADHD’ we were just active boys.  Likely too much sugar.  Either way, if we were too rambunctious we would be send outside to play and burn off some extra energy.  At school there was enough 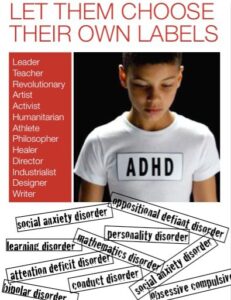 physical activity and breaks from academics to bleed off any extra energy.  An acquaintance of mine, Sonny, at the gym, was diagnosed ADHD when 7 years old. The teachers wanted to put him on Ritalin.  His grandfather stepped in and said no.  Grandfather enrolled Sonny in a martial arts class.  He says it helped him burn off energy and stay focused.

I can’t remember not being outside after school winter or summer.  On weekends we would head to the farm and in winter we would head out into the woods for hours.  Come back when time to leave stiff from the cold and wet from falling through the ice.

Above are just a couple of sites.  I don’t necessarily agree that there is anything wrong with a 8 or 10 year old boy that needs to be active. BUT if you do and want to ‘solve it’, then there are dozens of ways to help your child without drugs.  Of course, I do understand if you need the quick fix of a drug to control and keep your child quiet.  Your life is more important than your child’s.  I’m not really apologetic about the sarcasm - people need to spend more time with their kids.  Not just give them everything they want.

Some schools have taken away parts of education that are not academic.  Big mistake.

Is there a test, physical or otherwise for OCD?  I don’t think so.  Who makes the line in the sand? On this side you just like things orderly and clean.  On the other side you have a mental problem because you like things orderly, neat and clean.  Huh?  The headshrinkers would have you believe that 1 in 4 or 5 are in need of psychiatric help.  It is not that hard to convince someone they need some help but when that help comes in the form of a pill that is addictive and has side effects that include depression, suicide thoughts and death, well, let’s not terrify this person more than they already might be.

The ‘cheeky’ kid that gets into trouble because he disagrees with the teacher.  He is not convinced and won’t take things at face value.  He is light hearted about it and is seen as somewhat condescending when in reality he is way ahead of the curve but the teacher or parent finds this disrupting to the rest of the children largely because this ‘defiant’ child is just too smart.  But because he doesn’t fit in or just believe all he is told, he gets a prescription to subdue him.  There is no physical or mental test to determine at what point these kids need to be drugged.  It’s all opinion.  The psychiatrist listens to the parent or teacher and prescribes a drug.  That simple.  A caring person would have a conversation with the child, teacher and parents to see how to encourage and challenge the child.  Drugs are ‘easier’. 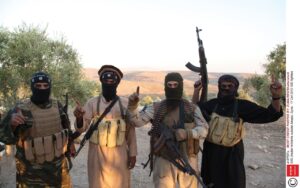 I’m not sure that terrorist organizations should even bother terrorizing the West, particularly North America.  Psychiatry with its
drugs are stripping away the life of upcoming generations and pretty much destroying any willingness to fight back.  ISIS would be smart to just finance the field of psychiatry and the job of destroying America would be done for them.