Published by greymouser on March 8, 2018

The History of Shock Therapy in Psychiatry

ECT was first developed by Ugo Cerletti born in 1877, the son of an agricultural engineer. After attending medical schools at Rome and Turin (he must have been out sick the day they covered the “first do no harm” bit), he went on to tour European “sanctuaries” including those run by the infamous Emil Kraepelin and Franz Nissl.

Cerletti applied the skills he learned in medical school to design a white winter camouflage suit (you think I’m kidding, but, I swear to God, not), after which he was naturally made Head of the Neurobiological Institute in Milan. What better place for a fashionista?

Cerletti turned his attention to the matter of epilepsy because, according to him: “I have always given prime importance to the study of 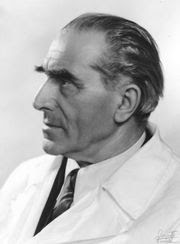 epilepsy, since it is linked to many areas of neurology and psychiatry”. In the course of his study of this disease, he tried to replicate an epileptic state in dogs by passing a 125-volt current through their bodies. He killed a lot of the dogs, of course.

After he’d finished stacking up the dog corpses, he decided to move on to humans. In his words:  “The daily confrontation with the dogs who had been made epileptic by electroshock treatment naturally gave me the idea of a possible similar application on man”.   Naturally.

Then, “One day I heard that at the Rome slaughterhouse they were killing pigs with the electric current used for lighting” so he went to the slaughterhouse to check it out. Sure enough, “I saw some butchers moving about among the pigs, holding in both hands a large pair of pincers, which had at both ends two discs, spiked with small, blunted, metallic tips. When they got near to the animals, they opened the jaws of the pincers and quickly grasped the front part of the pig’s head between the tips of the discs. 70-80 volts were then sent through the electric cable. As soon as the animals had been got hold of, they fell rigid to the ground without even uttering a sound and shortly after, began to present general clonic shocks.”  (Clonic shocks are seizures).   Well, you could see how that would appeal to a psychiatrist. Cerletti walked off from the slaughterhouse with a set of those electric pincers in hand, a happy man, off to kill more dogs.

Cerletti’s first human victim was a man that the police had apprehended who was “behaving in a very odd way, answering questions put to him in a very strange language which was completely incomprehensible”. The poor guy was probably speaking a different European language that nobody at the psychiatric institute could speak. And, from that, they diagnosed him as schizophrenic. (Note – schizophrenia is defined as “a mental disorder of a type involving a breakdown in the relation between thought, emotion, and behavior, leading to faulty perception, inappropriate actions and feelings, withdrawal from reality and personal relationships into fantasy and delusion, and a sense of mental fragmentation”. Hmmm … sounds a lot like most psychiatrists, doesn’t it?)

This poor sod was Cerletti’s “first experiment” [Cerletti’s words] in electroshock.  He secured two electrodes soaked in a saline solution to this man’s head with an elastic band and send 80 volts through his head. After this “treatment”, the patient begged “Not another one!  You will kill me.”

Cerletti’s response to this?  He immediately administered another shock to the patient, at a higher voltage, and damned near killed him. Cerletti noted that after the second shock “treatment”, “there was an interruption in breathing and a deathlike cyanosis of the face which, if upsetting in a spontaneous epileptic fit, seemed to us in this case distressingly unending”.

Cerletti then went on to administer 19 more shocks to this poor soul until he was in “complete remission” which, in psych-speak, means that he was quiet and compliant.

And that was the start of electroshock (HA!) therapy. Contemporary proponents of it will tell you that it is “safe” and “effective”.  Don’t you believe it.  Psychiatrists now use heavy sedation and anesthetic before shocking their victims, but that does not make the procedure one bit less harmful. Sedation and anesthetic before ECT is like slipping Rohynol to a rape victim first to leave her helpless and forgetful of the violation, and then saying that rape is “safe” and “effective”.

Sedation and anesthetic dull the agony the victim feels, but they don’t do a damned thing to lessen the damage.

ECT is not treatment. It’s terrorism. It’s time to put a stop to it.

Who Profits from ECT Machines?

Article by Charlotte Roberts:And under the heading of, “Did You Know?” there are two manufacturers of ECT machines in the U.S.  One of them is owned by two psychiatrists who loudly beat the drum for ECT.  Read more…