Say NO to drugs!

Published by greymouser on April 6, 2011

The whole labeling thing by psychiatrists really ticks me off.  How to slam and oppress an active child.  He can’t keep his attention on what YOU want him to keep his or her attention on so YOU label him or her ADHD instead of something positive. 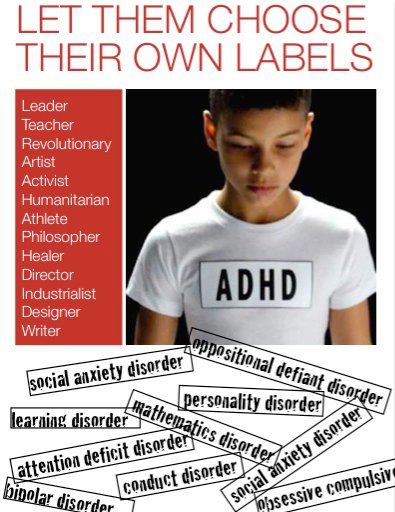 Makes for a pretty dangerous environment for the child.  He or she cannot be his or herself anymore.

What if Mozart was labeled ADHD because all he could do was write music.  Or Da Vinci was thrown in the nuthouse because his scribblings were fanciful and unrealistic.  Over the centuries in other cultures people were ostracized from their society because they did not conform and many talents were squashed BUT with drugs like ritalin the evil bastards(psychiatrists) are able to neutralize thousands and millions of children all the while having the general population thinking they are helping.

Or one that I like much better: “Drugs are for losers!”

Categories: Advices
Tags: drugs are for loserspschiatric labelingsay no to drugs

Before you allow your children to be subjected to the dubious wonders of drugs like Ritalin, read this article by Dr. Breggin.  He outlines exactly what various drugs actually do to the brain.  It brings Read more…

The Myth of the Chemical Imbalance…Quote:

"I don't believe I have ever heard a knowledgeable, well-trained psychiatrist make such a preposterous claim [that patients have a chemical imbalance], except perhaps to mock it...In truth, the 'chemical imbalance' notion was always a kind Read more…

I don't agree with everything in this article.  It is well researched and from the psychiatric industry itself, suggesting that materials such as the Diagnostic Statistical Manual (The go to manual of Psychiatry) should be abolished. Read more…