Why I Don’t Trust Big Pharma

Published by greymouser on August 2, 2020

The damage to society from opioids is something that is not in question.  In an article on canada.gov,

“Measuring the impact of the opioid overdose epidemic on life expectancy at birth in Canada” shows that in the USA and also in British Columbia “a decrease in life expectancy due to opioid drug overdose deaths.”

In researching it was difficult to find individuals that were more interested in curtailing the production or addressing the causes of the epidemic.  Most of the articles that I can find speak of making it safe for addicts to do the drugs: “Harm reduction.”

This article reviews a book called:

Overdose Heartbreak and Hope in Canada’s Opioid Crisis
by Benjamin Perrin, professor at University of BC

“From all of the information put forth in the book, Perrin makes a hard case that safe consumption sites are the answer. Getting people the support they need, giving them access to safe places to use drugs with people there to help if they need it. These sites are there to connect people to services and support. Perrin puts forth a strong argument to stop criminalizing people who use drugs, and how this would positively impact all levels of society, those who are taking the drugs and those who deal with the fallout from the illicit drug trade. Perrin also takes a hard look at the evidence for and against the decriminalization of all drugs, with Portugal giving some insight into how the strategy can play out. “
Heartbreak and Hope

This, as a solution, doesn’t really do anything to help the fact that there is a crisis. This solution, in no way prevents or slows the increase of people starting and using these deadly drugs.  All this will do is increase the burden of society to support more and more drug addicts and their habit.  I understand that many of these people, if not the majority, are not ‘street people’ and became addicted somewhat accidentally.  So, let’s take this back a bit.  When we were young and had a bone set or tonsils out, we weren’t prescribed opiates.  After tonsils being removed, one got a little extra ice cream to soothe the throat.  For the mending bone in an arm, say, one was instructed to be careful not to sleep on it.  I had a greenstick fracture of my radius at age 14.  Knocked out at the hospital to straighten it.  That was it.  I may have slept a little extra the first couple of days.  Then I was out playing and going to school.  Too busy to notice the pain, I guess.

This would be one of the first things one would think to do:

“B.C. Attorney General David Eby spoke of the "terrible toll" opioid addiction has taken on many British Columbians and their families as he announced a lawsuit against pharmaceutical companies to reclaim costs associated with the ongoing opioid crisis.”

Purdue Pharma, the manufacturer of Oxycontin claims that it is not their fault, they claim no wrongdoing.

Simon Fraser University drug policy researcher Donald MacPherson: “MacPherson said the government should be working on providing a clean supply of opioids for people with addictions if it wants to stop the overdose crisis.”

Supplying ‘clean’ opioids to addicts will do nothing to prevent more and more people from becoming addicted.

And from the Globe & Mail:

There are doctors out there that would like to limit patients’ use of opioids, bring these patients off the drugs slowly, recommending other solutions or less addictive drugs for pain.  But complaints and demands from certain public, and I’m sure influence from Big Pharma leads to this:

“British Columbia doctors treating patients with chronic pain will be required to prescribe opioids without limiting dosage or refusing to see patients who are on the medication that has come to be associated with illicit overdose deaths.” The Globe & Mail

“Figure 3. National Drug Overdose Deaths Involving Any Opioid—Number Among All Ages, by Gender, 1999-2018. The figure above is a bar and line graph showing the total number of U.S. overdose deaths involving any opioid from 1999 to 2018. Any opioid includes prescription opioids (and methadone), heroin and other synthetic narcotics (mainly fentanyl or fentanyl analogs). Opioid-involved overdose deaths rose from 21,088 in 2010 to 47,600 in 2017” 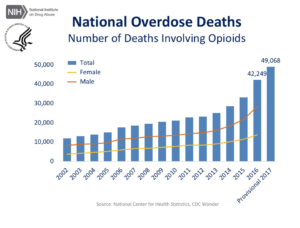 Above you will see this graph from the CDC website that shows increase from 8,048  in 1999 to 49,068 deaths in 2017.  Not sure if these deaths include methadone.  Either way this is a 600% increase in deaths in that time.  Add in the data below, the unclassified opioid deaths, it will be a lot higher.

This epidemic has been created by the pharmaceutical industry, one of the biggest culprits being Purdue Pharma owned by the Sackler Family.  They still think they have done nothing wrong. If fact they are now producing “millions of doses of lifesaving opioid overdose reversal medications.” So, this family is responsible for the murder of thousands and destroyed families beyond measure, and they now make money from the medications to fix it!!

No small wonder that I don’t trust the pharmaceutical industry.

Add in the deaths resulting from prescription drugs and the total per the CDC is 70,237 in 2017. 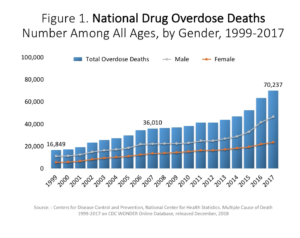 But from a study by Donald Light, who is a professor of comparative health policy at Rowan University School of Osteopathic Medicine in Stratford, New Jersey:

“Estimates dating back nearly two decades put the number at 100,000 or more deaths annually, which includes a study published in the Journal of the American Medical Association in 1998 that projected 106,000 deaths. A more recent analysis estimates 128,000 Americans die each year as a result of taking medications as prescribed – or nearly five times the number of people killed by overdosing on prescription painkillers and heroin."

‘ “Donald Light, a medical and economic sociologist and lead author of a 2013 paper that detailed the estimate, entitled “Institutional Corruption of Pharmaceuticals and the Myth of Safe and Effective Drugs.” “About 2,460 people per week are estimated to die from drugs that were properly prescribed, and that’s based on detailed chart reviews of hospitalized patients,” ‘

Add that to the 70,000 plus deaths from Opioids and other overdoses and you have a total of about 200,000 deaths per year directly resulting from carelessness and neglect of the pharmaceutical industry.

And these numbers are just in the USA.

Again, no small wonder I don’t trust the pharmaceutical industry.

This leads me to another so called controversial subject: vaccines.  In 1986 a law was passed preventing Big Pharma from being sued directly. (The National Childhood Vaccine Injury Act)  A ‘committee’ was set up where complaintants (usually parents of vaccine damaged children) could present their case.  The lawyers that represent the defendants are Justice Department lawyers.  Any money awarded is paid by the US Government (read: taxpayers).  There is no jury and one person adjudicates.

Per fairwarning.org, as of 2018, $4.2 Billion has been paid out to families of children damaged by vaccines.  Parents of the children affected are 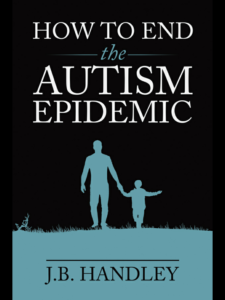 how to end autism epidemic

much more likely to get compensation if they don’t mention autism.  There is an excellent book on the history of this mess written by J B Handley, called ‘“How to End the Autism Epidemic”.

(Note: As the Pharmaceutical Industry is protected by the The National Childhood Vaccine Injury Act of 1986, the money paid out comes from the US Government. Taxpayer’s money.)

Austism has gone from 1 in 10,000 in the 1960s/1970s to 1 in 36 in 2018.  The numbers started to jump dramatically when Big Pharma became protected with the passing of the aforementioned law. at the same time increasing the vaccine rollout exponentially.

Every baby today is given about 72 doses of 16 vaccines (per CDC).  In the 1960s and 1970s one received about 3-5 doses of vaccines.  These numbers vary slightly depending on where you look but the point is starting in 1986 with the passing of the The National Childhood Vaccine Injury Act they increased by a factor of about 12.

The pharmaceutical industry has yet to admit any wrongdoing with regard to vaccines and autism.

Who controls the narrative?  I mean, who decides what you hear on the radio? What articles will you see in newspapers? What is going to get pushed in the 6 o’clock news.

Per the Periscope Group

Media owners and editors are rarely going to bite the hand that feeds them.

“Are you still going on about that, that science is done! There is no proof of that! That’s a conspiracy theory.” - That is what you will hear if you try to counter Big Pharma’s narrative.

There is lots of information out there. But the majority of people will not do their own research, will unwarrantedly trust the media, doctors and researchers that are paid by pharmaceutical companies.

As you can see earlier in the article by some of the links, that much of the information available is on government websites.  Not that difficult to find if you know where to look and are willing to look.

So, you can see that maybe, just maybe, there are some very good reasons to NOT trust the pharmaceutical industry and their supporters.