A Review of the book:

Smokescreen, by Kevin A. Sabet

You’ve been lied to.

For the last 20 or 30 years, you’ve been told that marijuana is safe, that it’s harmless, that it’s “an herb”. It simply isn’t true.

Smokescreen is an impassioned, intelligent plea to look beyond the smokescreen that the vested interests have thrown up. The book details 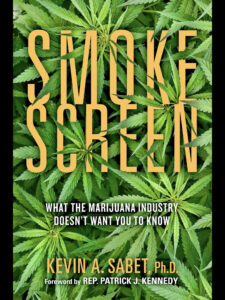 how billionaires such as George Soros and those of his ilk have spent and continue to spend enormous sums of money to entice younger and younger people to try marijuana, in all its various forms.

Sabet leads us through the serpentine campaign to convince Americans of the wonders of pot consumption. He shows how marijuana lobbyists with almost endless amounts of money have been able to bribe and sway politicians and others into ignoring the irrefutable facts about marijuana and declare that pot is a panacea, that it will “benefit all”. What motivation do these vested interests have in this burgeoning cannabis industry? Join Keven Sabet as he “follows the money”.

Kevin Sabet is the ‘go-to’ guy for those fighting the legalization of marijuana during the last couple of US administrations. The book is loaded with verifiable information, facts and references. He debunks any idea that marijuana today in any way compares to that of the drug from the 60s and 70s. Sabet also relates numerous anecdotes that reveal how passionately he is devoted to protecting the health of children in the world today. He really cares. This book is a must-read for anyone nibbling at the edges of the falsehood-strewn bait that the power-elite vested interests have cast.[/read]